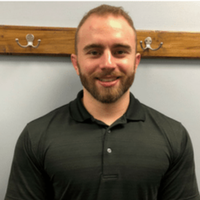 Please take a moment and let us know how your experience was.

Gavin Shannon grew up in Utica, OH., and went to Utica High School where he played football and was a captain of the wrestling team. Gavin knew early on what he wanted to do for his future career. After having ankle and back injuries caused by his athletics interests, he aspired to work with injured athletes to help them return to the game.  Gavin originally planned to be an athletic trainer and work with sports teams to help athletes with their injuries. He took the first steps towards this career by going to the Licking County Career Center his junior and senior year of high school for physical therapy and exercise science. Gavin continued his plan by committing to Ashland University to major in athletic training. After his first 2 years, he realized he wanted to do more with rehab and physical therapy - so Gavin switched to exercise science. He was advised it was a better course to achieve his goal, and with a strong passion for exercise and fitness, he would be able to do personal training while he continued his education. Gavin also wrestled for the Ashland Eagles for all 4 years of college, which helped him develop good teamwork skills and a drive to be successful. During his education at Ashland, Gavin completed 300 hours of internships in different physical therapy clinics. During them, he learned that he would like to become a Physical Therapist Assistant (PTA), where he could work more directly with patients and see their progress each session. After receiving a Bachelor of Science in Exercise Science at Ashland University in 2015, Gavin continued his education at North Central State College in the Physical Therapist Assistant program. He completed all 5 semesters of the 2-year associate’s degree with honors, while also working full time as a personal trainer helping people reach their fitness goals. Gavin performed his clinical rotations at the Galion Community Hospital, the Childhood League Center, and the OSU Medical Center, gaining valuable experience working with a variety of patients and conditions. He earned his Physical Therapist Assistant Associate’s Degree from North Central State in 2017. Currently Gavin a proud member of Advanced Spinal Care and Rehabilitation's chiropractic health and rehabilitation team. He enjoys keeping a busy schedule, particularly when it involves helping others. This includes his work as a PTA, personal training on the side, helping coach Utica’s wrestling team, and working youth open wrestling tournaments. In his own words, “I don’t know how to say ‘no’ to work!"

Your form has been successfully submitted!

We will be in touch with you if additional information is needed.